Introducing Aerospace and Defense Advisory Board 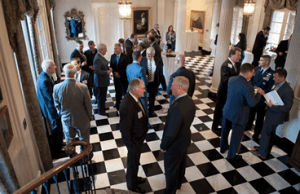 The aerospace industry’s strong presence can be felt throughout Tennessee. Memphis is home to a major personnel center for the U.S. Navy along with FedEx’s global headquarters and Super Hub. Bell Helicopter is operating and expanding a major production facility in Johnson City, while in Tullahoma, Arnold U.S. Air Force Base has been responsible for testing virtually every aerospace system flying since the end of World War II. Aircraft engine maintenance repair and overhaul header Standard Aero has deep roots in Maryville, and Nashville is home to Embraer and tier two supplier Vought.

In an effort to further advance Tennessee’s growing presence in this sector, the Tennessee Aerospace and Defense Advisory Board has been created. Comprised of 10 members, the advisory board is made up of senior executives from the private, educational and R&D sectors who work together to advise Gov. Haslam and TNECD and on best practices, long term strategies and market opportunities to attract and expand new and existing business for the state.